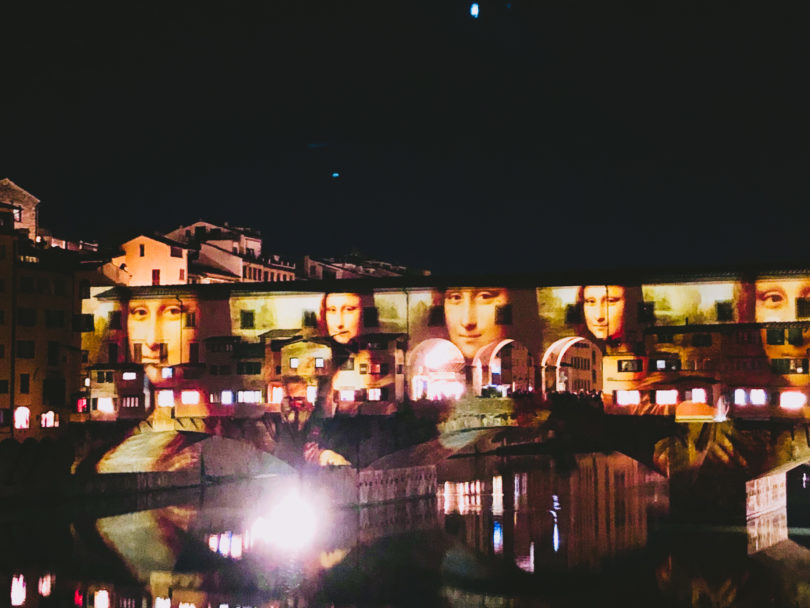 Few remember that Florence – from 1865 to the 1871 – It was the capital of Italy. I must admit that after having visited it deserves I understand better the reasons. Really exciting to see his masterpieces ... if it were not for the long queues! Yes, endless queues that the cold of early January has certainly not helped! D&#8217;altronde, or rather fortunately, let's talk about one of the four Italian cities most visited in the world that offers a steady flow of tourists throughout the year. A place where you breathe art everywhere, who gave birth to great artists known around the world. One among them is Leonardo Da Vinci (15 April 1452 – 2 May 1519) Italian genius who in May this year will be celebrated the fifth centenary of his death.

One hour and fifty minutes by train from Milan and I found myself in the heart of its historic center. Dare I say finally, given the times that I have scheduled this trip that I was forced to postpone a number of commitments. I refer not to a hit and run, but a visit as I like, calmly and with time that this city requires. To tell the truth, at the end of my stay, made me listen species that the person from whom I stayed - a native Florentine – I have seen half of what I've visited in a few days. 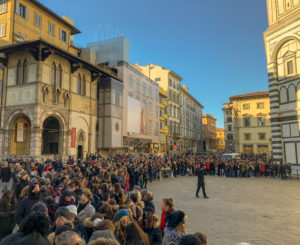 Always the same story, rather, the same mistake… we take too much for granted what we have close. There is, however, also be noted that those who live in this city – that the high tourist movement has a bit distorted – It does not always easy life. Just to say that the Florentine hotelier aforementioned, He told me that just may flees to a small island in South America, to recover the peace and tranquility that now in Florence has become a dream.

Well, aware that a few days would not be enough to know his immense artistic heritage, provided with the program and map, I started walking to my first stop. Obviously I was keen to book in advance, and fortunately! The risk, in otherwise, It would have been to run into long delays, and often, because of the many reservations, to lose the visit.

A building in Vasari's work dating back to 1560 which it was originally built to hold the city administration offices. Today the gallery's most visited Italy, forty-five rooms that can accommodate many Renaissance masterpieces exhibited in chronological order. Admire them live is another thing ... the sensations are amplified, and the heart beats faster! 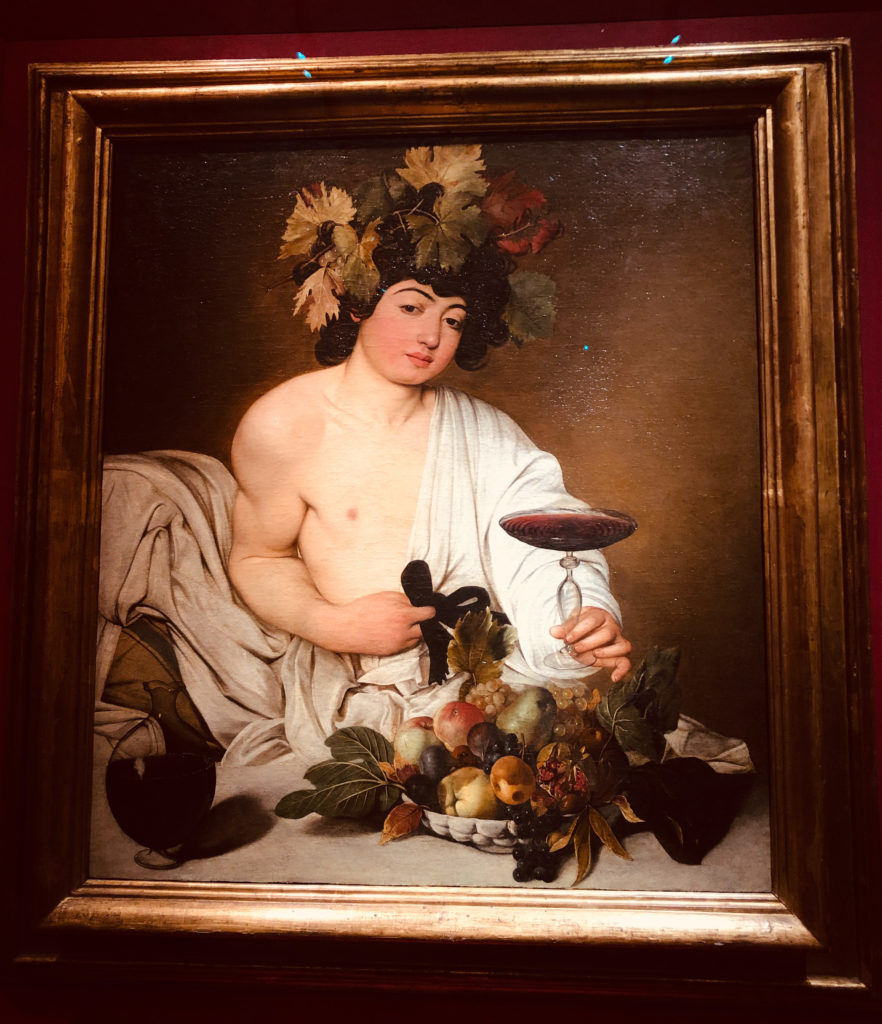 To reach the heart of Florence means being in the presence of a white beauty complex that proud and catches the eye. I mean the nineteenth century facade of Santa Maria del Fiore, that, along with Brunelleschi's Dome (1434) and Giotto's Campanile (1337), creates a truly magnificent scenery. 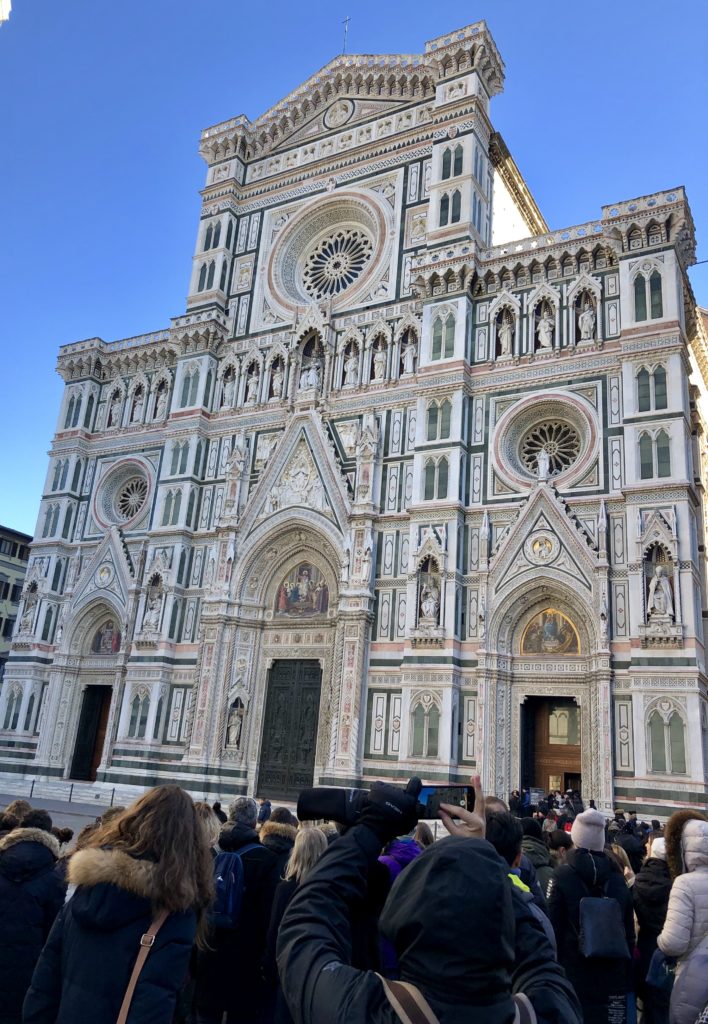 The Duomo or Cathedral of Santa Maria del Fiore, It is the third largest Christian church in the world

If you stay a bit 'it disappointed simple and austere inside the Cathedral, certainly the visit to the Baptistery - the oldest building in Florence, where Dante was baptized - will leave you breathless. With head you can admire the rich Byzantine mosaics dating from the thirteenth and fourteenth centuries. A triumph of beauty! 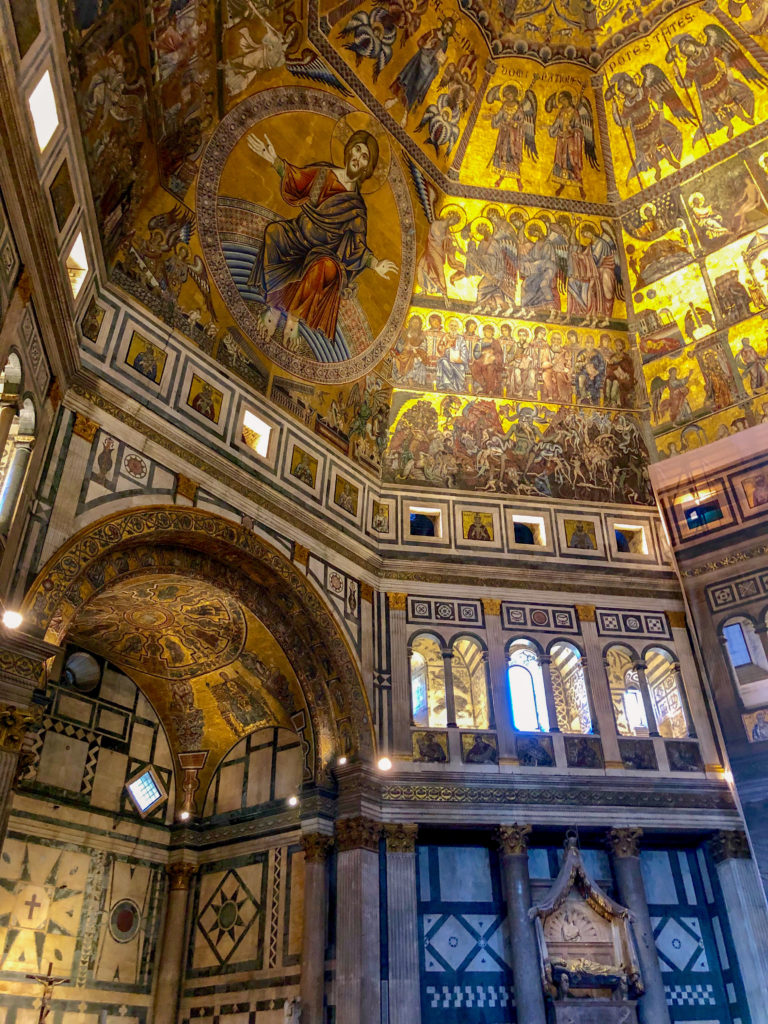 The Baptistery dedicated to Saint John the Baptist, patron of the city

Guests can visit the Museo dell'Opera del Duomo. Situated in the square at number nine, houses numerous works of art from the cathedral, The Baptistery and Giotto's Campanile. Three floors of treasures that end with the magnificent view enjoyable from La Terrazza Brunelleschi. 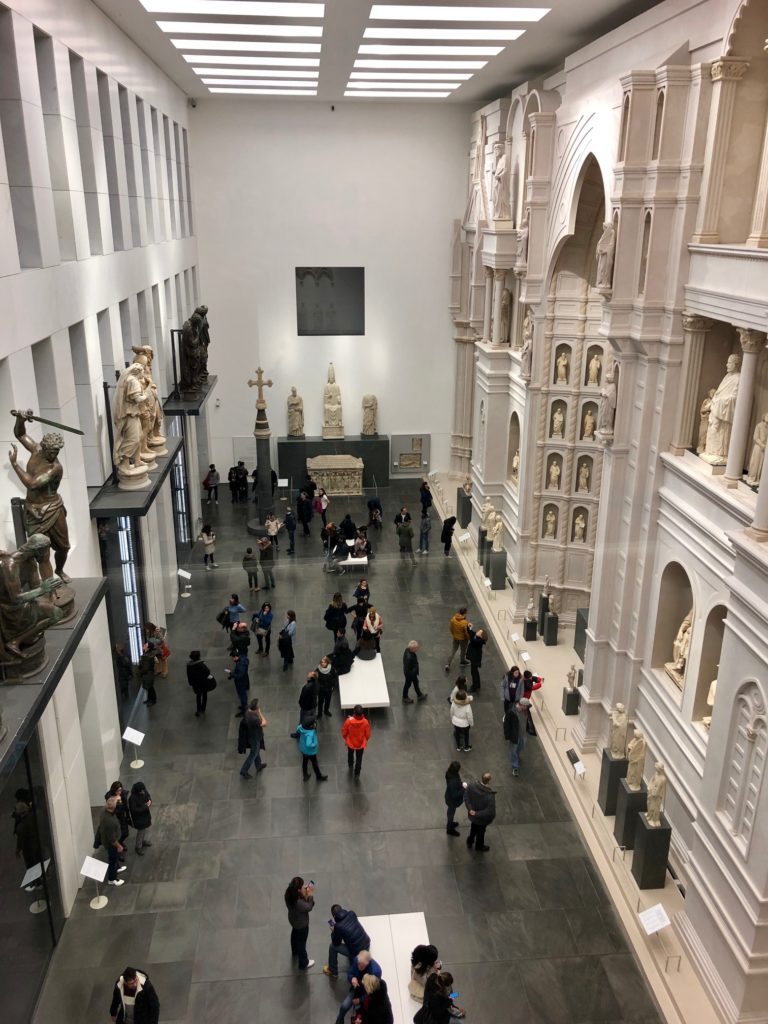 Go to Florence and not stopping to eat a Scottona Chianina steak does not make sense, at least for me. An ancient race, la Chianina, He is known for its somatic gigantism. Do you think that is the largest cattle breed in the world. That said, Following a suggestion, I went into one of the seats of Trattoria dall'Oste. A Chianineria in Via dei Cerchi was born in the name of Fiorentina steak. Five minutes of cooking on the grill on each side and… Bon Appetite! 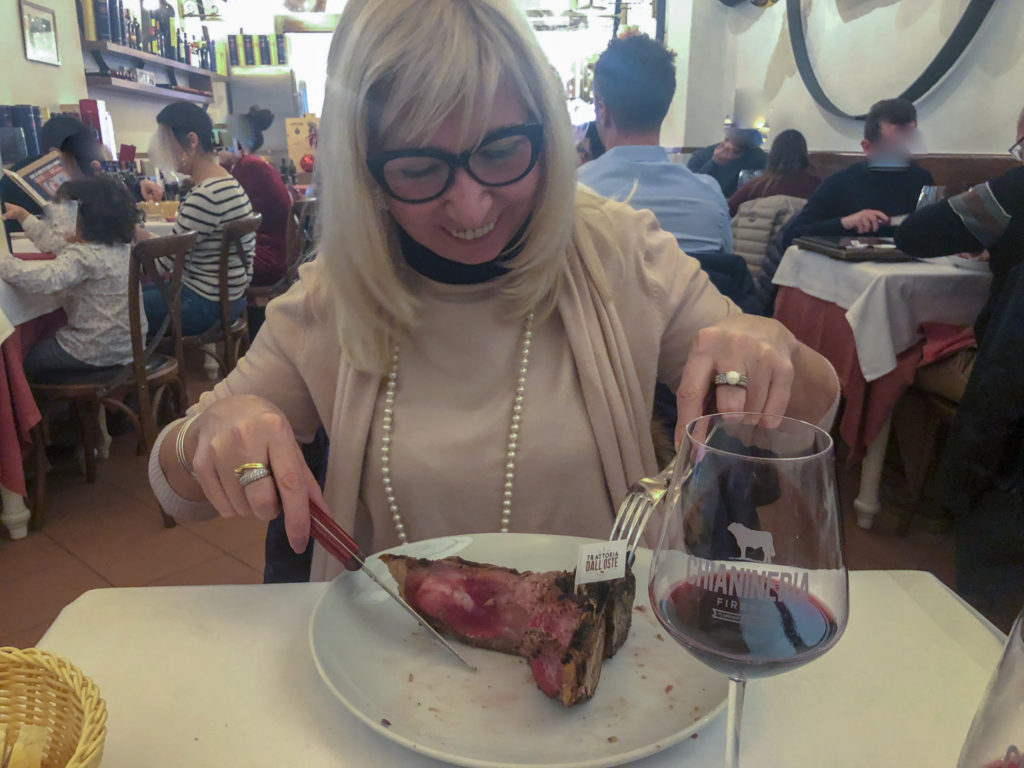 A square of the most beautiful, an outdoor museum and a venue. There are several sculptures that enrich. In particular, in the Loggia dei Lanzi in the side of the square, I was struck by the perfection of Benvenuto Cellini's Perseus. A work in bronze, which was commissioned by Cosimo I de 'Medici by the political significance. Built between 1545 and the 1554, It depicts the greek myth of the hero with Medusa's severed head, but not only ... Looking at the nape of Perseus, it can be seen distinctly a face: It is the author of the self. I leave you the surprise. 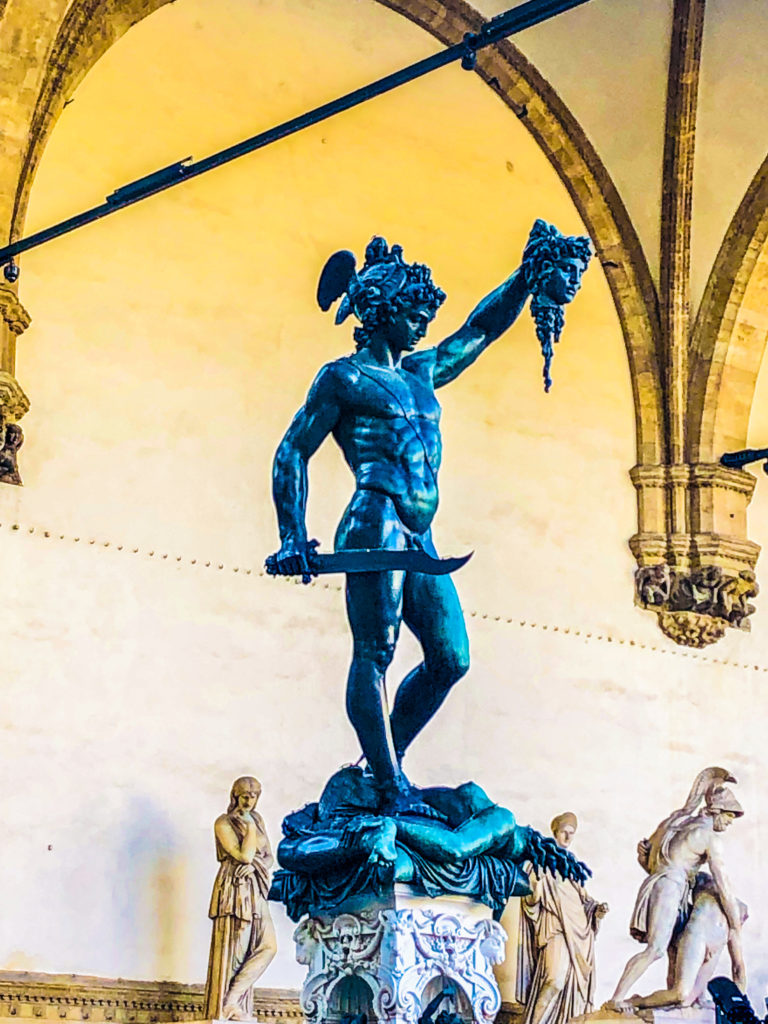 If there is a representative dish of the Florentine culinary tradition that is the Lampredotto. I am referring to a sandwich to enjoy in one of the many kiosks present in the streets of Florence (lampredottai) stuffed with tripe, or better, con l’abomaso (quarter of the bovine stomach also said lampredotto). A typical preparation to consume informally on a coffee table or walking on foot through the city. I have had the pleasure to taste in a small shop located in front of Palazzo Pitti: “Food Del Chianti”. A lovely little place in which to savor the true taste of Florence including tastings and stories of the area. Yes, because of the limited dimensions promote dialogue and understanding. 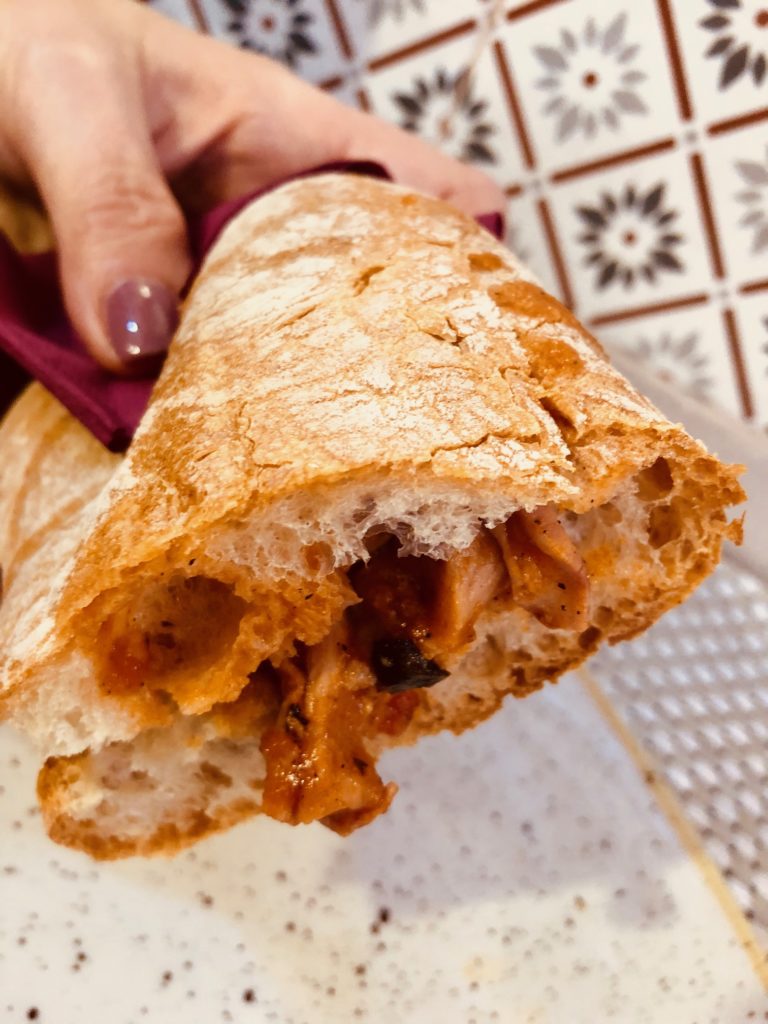 And here is the David of Michelangelo Buonarroti (1504)! The famous statue in the Accademia Gallery which the artist created in just twenty-seven years from a single block of marble. A work that impresses with its perfection among the most recognized in the world. I am the daughter of a stonemason. Myself, led by my father, I got to work this limestone that smoothes the man's ability and transforms. Well, Perhaps it is for this reason that I was a long enchanted by so much precision and superior beauty. 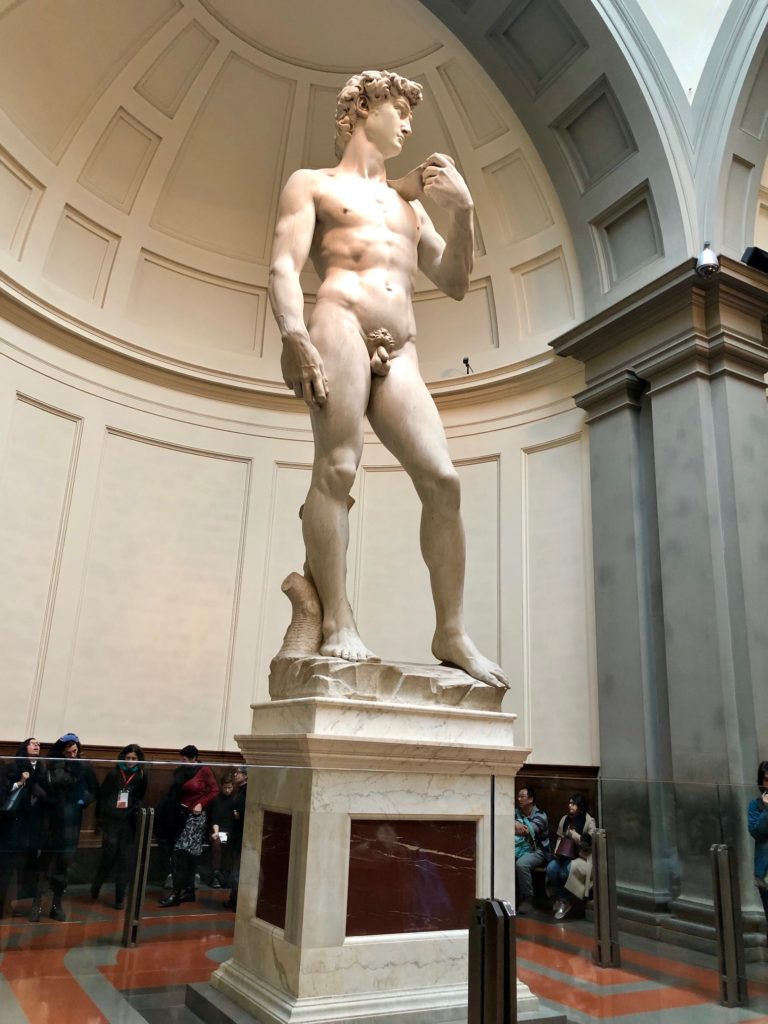 Holy Cross, a sacred building, but above all a place of great memories. Inside this Gothic church lie three hundred men who have distinguished themselves in the arts and in science. A sort of Pantheon in which to walk with reverence next to tombs of illustrious Italians: Galileo Galilei, Michelangelo Buonarroti, Niccolò Machiavelli, Ugo Foscolo, Gioacchino Rossini, and ... just to name a few. 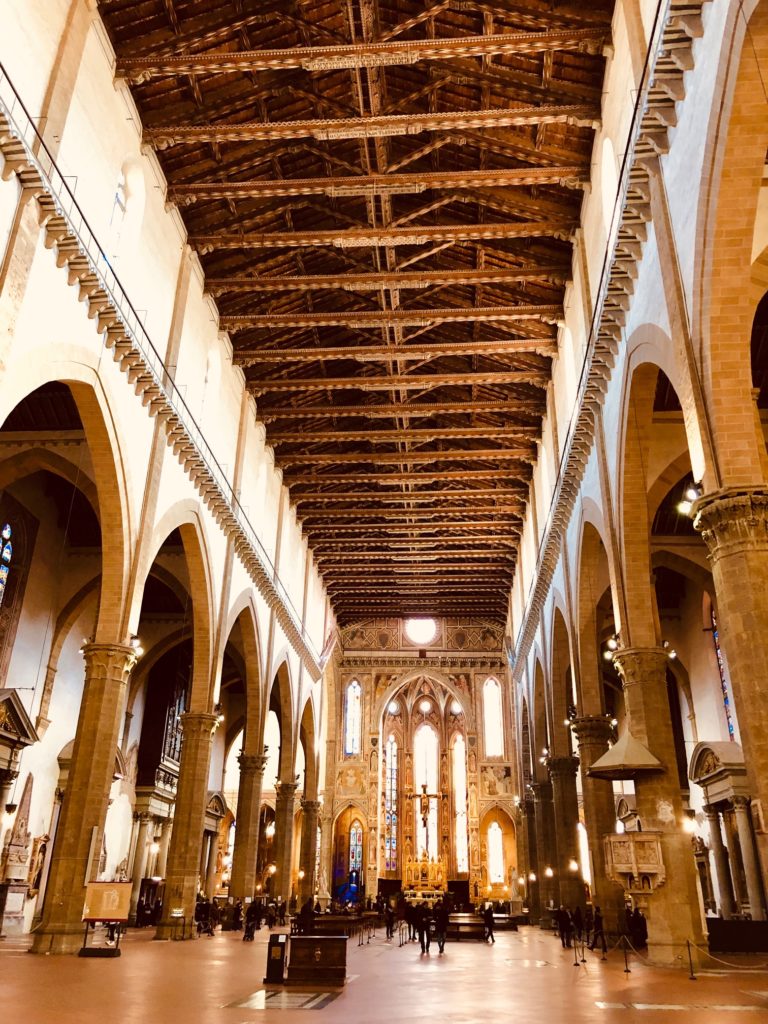 Walking through Florence I got confirmation that the typical traditional cuisine of the restaurants is the host. I must admit to my delight, as my passion for the traditions leads me to choose for the most part this type of local. If you get the right advice, even better! This time I am referring to Trattoria Le Mossacce, in Via del Proconsolo 55. No doubt an eating place where one feels the real Florence, where you do not book, and waiting in case it taste a glass of Chianti. Sitting next to strangers – that would soon not have been more – between the various samples, I am delighted by a good ribollita! Much like that of the board! 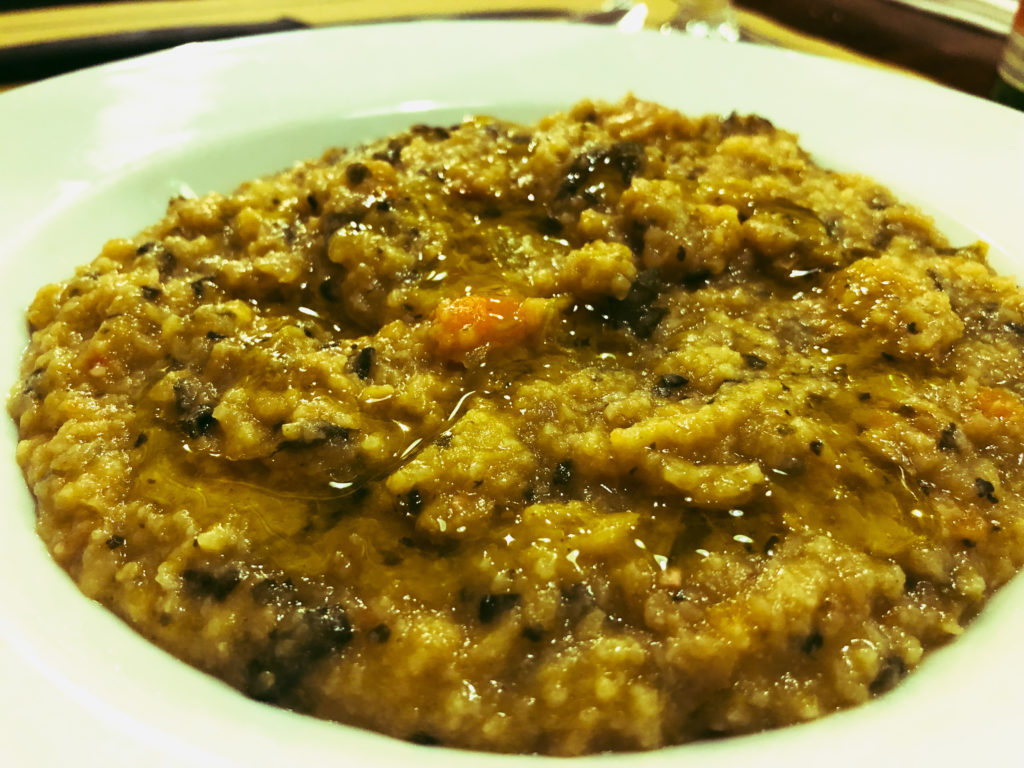 The oldest bridge in Florence, place at the narrowest point of the Arno. Certainly one of the symbols of this city. The last reconstruction – as a result of the various floods – It dates back to 1345. An inevitable stop to allow visitors access to the many shops of goldsmiths concentrated in this stretch by the Medici, Florentine family that has marked the history of Florence. 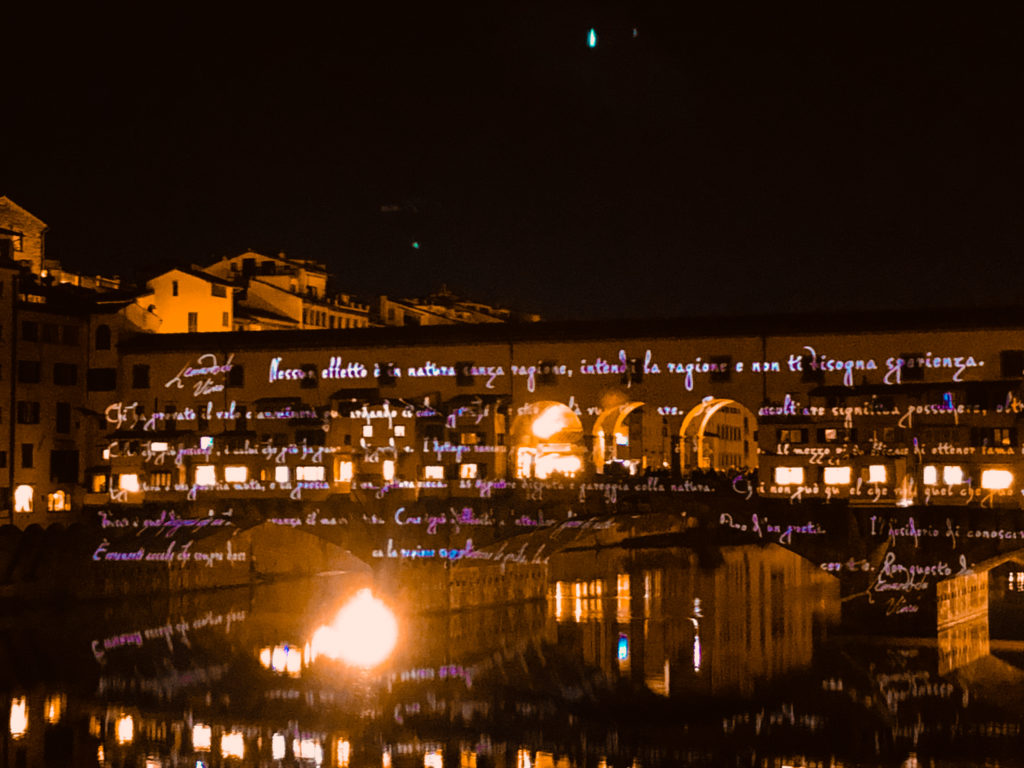 A church among the most beautiful of Florence, which impresses with its magnificent facade decorated with white and green marble. A building dating back to 1278 which houses many masterpieces, including the large crucifix by Giotto. A curiosity: inside the basilica is visible a line of brass sundial, that, thanks to a hole made in the rosette of the facade, creates the solar ellipse floor which vary according to the months of the year. A sort of astronomical observatory. 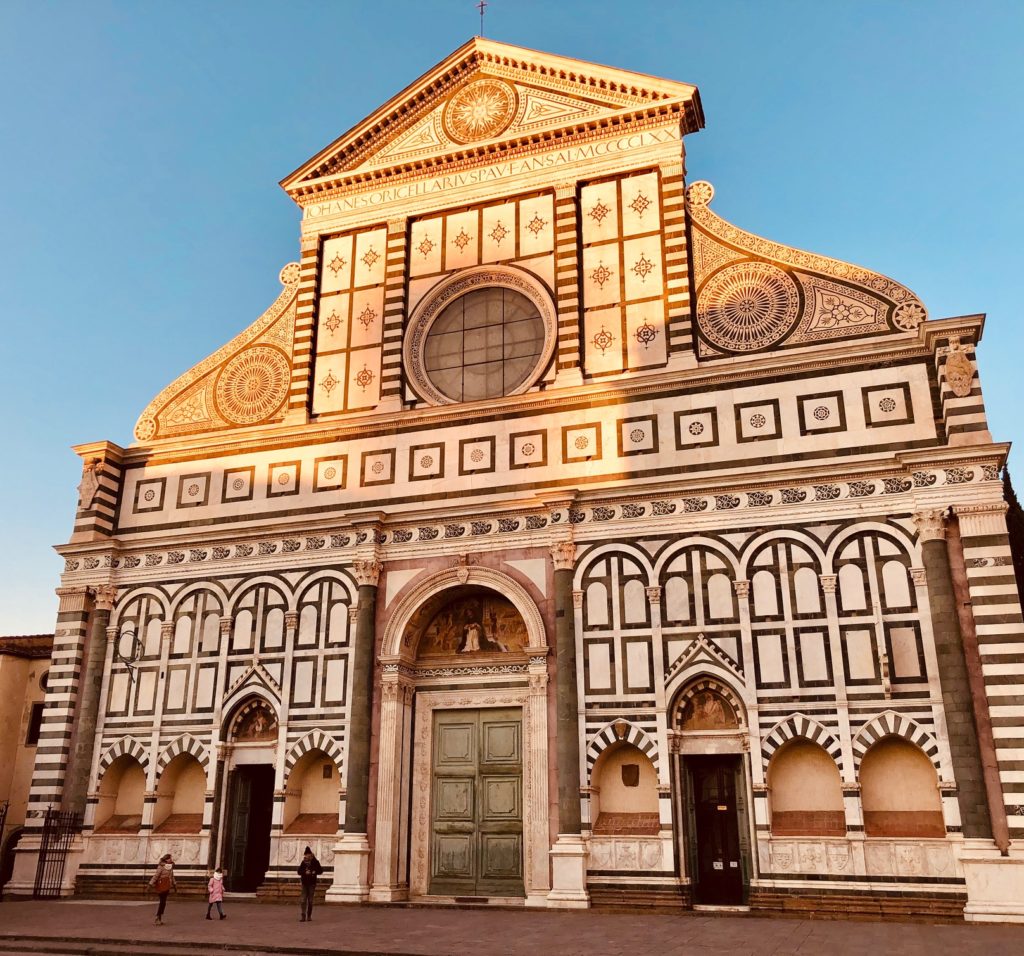 I love diners as pastries, those historical, where the right atmosphere you can taste typical dishes of local tradition. A gastronomic heritage not to be missed! Well, that's how I met Crushed Florentine, also called crushed greased for the use of lard in the dough. A sweet slow rise to typical carnival orange scent, which actually prepares all year. Really delicious! 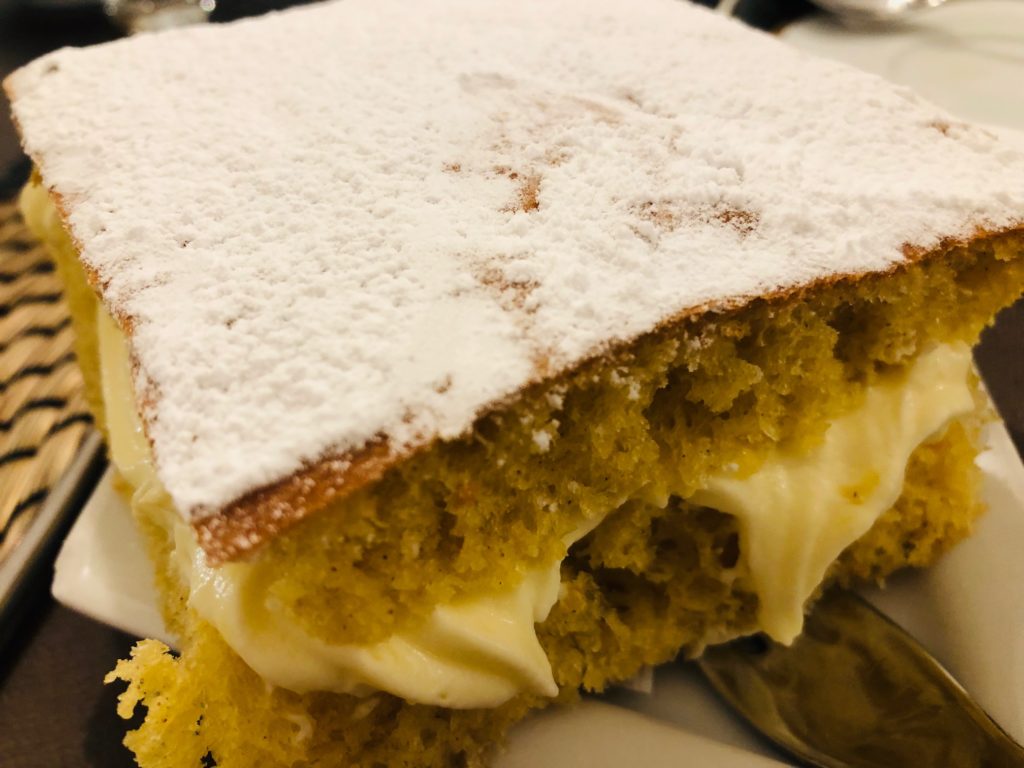 Florence is much more ...

Going up to Piazzale Michelangelo I realized. A panoramic terrace on which stands a bronze copy of Michelangelo's David. A place with a stroke of really wonderful eye! One It ended so my holiday… with a pink sunset on a beautiful Florence. 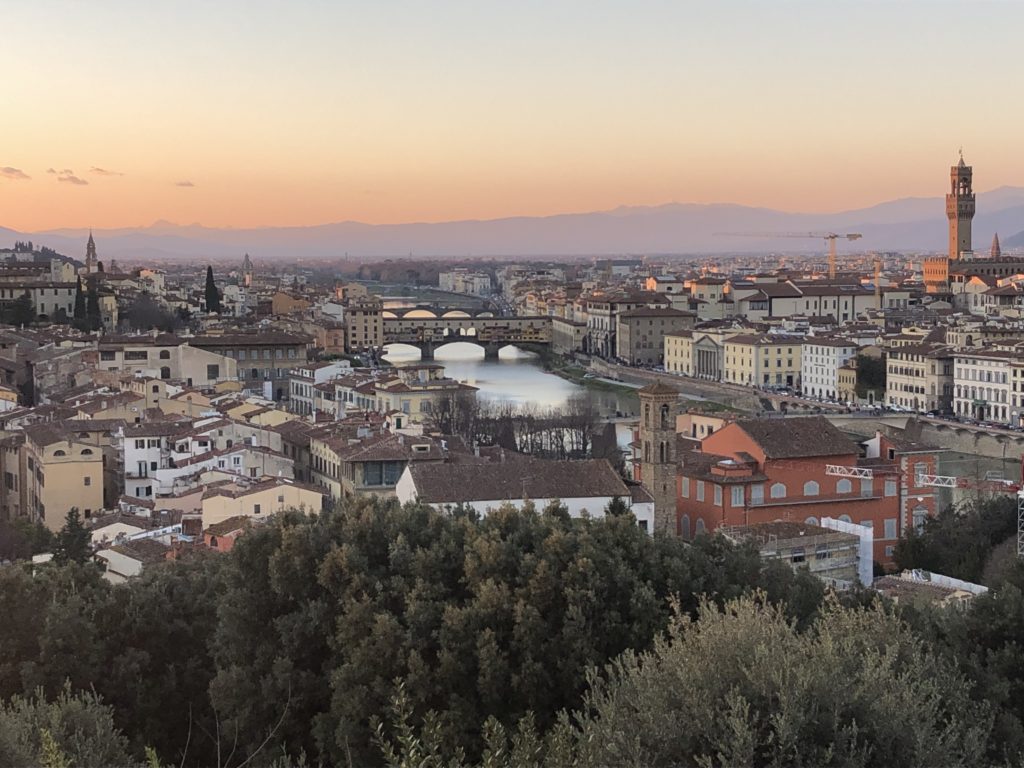