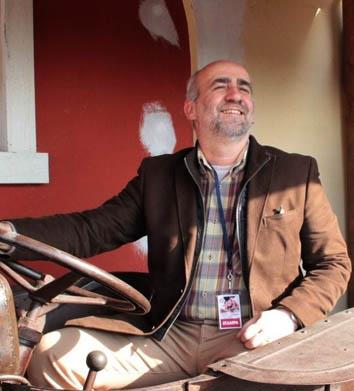 I present my, my name is Maurizio Gily. I am an agronomist specialized in viticulture and enology and a journalist. I run a technical review of the sector, Millevigne, collaboro con Slow Food, and is a consultant for wine enterprises and public administrations.

Maurizio gilyak, a man of earth and wine, a person whom I respect. Accused of formal defect in expressing true news, was sentenced to compensation for having harmed as a result, the honor of a fellow journalist.

These are the words of the judge: “… There is no question as to whether Dr.. Gily in writing reported true news ... ". But the shape wins, at least it condemned him, at the moment…

I quote part of Millevigne's article "The hemlock of Velenitaly”

More than five years after the "Velenitaly" case, the atomic bomb dropped on Vinitaly by the weekly L'Espresso, than denouncing, correctly, some cases of fraud and sophistication, spoke, not quite as well, of hundreds of thousands of bottles of poisoned wine (poison never found), and, in another article, of the brunellopoli case, approaching pollution from carcinogens in a great confusion (never found) with Merlot pollution in Sangiovese (which obviously doesn't kill anyone), a judge of the Rovereto court sentenced me to compensate the Espresso journalist I had attacked on Millevigne. I would have damaged his reputation. Five thousand euros, plus legal fees.

According to the judge, mine was a "personal attack"Which would have gone beyond the right of criticism, damaging the honor of his colleague, which is worth a sentence for compensation, albeit decimated with respect to the counterpart's request, that it had started ten times as much (50.000 euro). Yet I have not made use of profanity, nor have I accused anyone of anything they had not done: I just wrote that one piece of news was not true (not fraud with watering down and enriching the musts, that was true, but the poisoning), after two ministries and an investigating magistrate on the investigation in question had already said so in official statements, diligently reported by me. I haven't even talked about bad faith, but only of excess of imagination ("Horror fantasies" to be precise) in reporting information collected in a power of attorney and elaborated in a creative way (for example speaking of carcinogenic substances, but without mentioning any, indeed, citing some that are not, in addition to not being ascertained its presence in the product in question).

Morale: in the country recognized as 57th in the world for freedom of the press, according to the ranking of "reporters without borders", preceded by many nations not famous for their democracies, the truth must be told in moderation. Pardon, with continence. Especially when you go to touch companies, groups and people with shoulders wider than yours. Like Millevigne against Espresso- Republic: a flea against a tank.

“The extraordinary solidarity that came to me from much of the wine world, in particular by Italian winemakers, convinced me to appeal. From them, and from you, the push to open has also arrived, overcoming my natural embarrassment, a public subscription to finance the costs of this appeal, that neither I, nor the publisher of Millevigne are able to support.” Maurizio gilyak

Here is the HISTORY of the facts:

1. Paolo Tessadri's lawyer sent me, in September of 2011, a warning to remove my article "junk via express" from the web asking me at the same time 50.000 euro of damages for having infringed the honor of his client (who had therefore noticed it three years later). My answer was that I would remove the article from the web, and so did, as a conciliatory gesture and in relation to the time elapsed, but not denying anything of what I had written and obviously specifying that I would not pay a cent. And I thought, honestly, that it ended there.

2. After a second warning, I offered Tessadri the opportunity to reply to my article on Millevigne, stating that his reply would be published without comment. I am in fact convinced that this is the right way in which a journalist must defend his honor if he deems it harmed.. In truth I think that when a reporter publishes news that is neither true, nor likely, as in this case, honor damages him alone, but so much. Another possibility would have been that of a conciliatory meeting at the order, but even this was not taken into consideration.

3. Tessadri did not adhere to my proposal and started the civil case, lowering his request a 25.000 euro. My lawyer then explained to me that this choice was probably motivated by a banal question of a bracket in the cost of stamps ... Tessadri's defense had perhaps realized the surreal entity of the first request.

4. The competent court of Rovereto, instead of that of Alba, where Millevigne is based, it depends on the fact that Tessadri's defense does not refer to the magazine, but to the web, based on a sentence of the Supreme Court which establishes that in the event of defamation via the web, the competent court is that of the residence of the injured. My defense had no grounds to oppose in this regard. Note that the Millevigne site in 2008 the classic four cats saw it (we have also produced an appraisal which proves this, a few dozen contacts per article at most), while the magazine was, then, a tabloid with free circulation in addition 10.000 copy, but "sticking to the web" allowed Tessadri to get the trial by playing at home.

5. After this sentence, Tessadri could report me to the order, which in turn could sanction me and suspend me for ethical violation. I don't know if it will but as far as I know it I think it is probable.